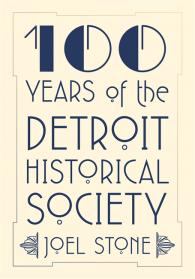 100 Years of the Detroit Historical Society

Since its founding in 1921, the Detroit Historical Society (DHS) has been dedicated to safeguarding the history of our region so that current and future generations of metro Detroiters can better understand the people, places, and events that helped shape our lives. 100 Years of the Detroit Historical Society, written by senior curator Joel Stone, captures in words and photographs the little-known story of the people who have been telling Detroit’s stories and preserving its material culture for the last century.

100 Years of the Detroit Historical Society leads in a chronological manner through four distinct phases—each with its own successes and failures—with a nod to the future direction of the DHS. Stone begins by laying a foundation of the city’s history and describing the era that prompted the organization’s founding—first intended as support for the Burton Historical Collection, then as stewards of a growing artifact collection in a "cabinet of curiosities." DHS became the primary support organization for a new municipally owned and managed historical department, resulting in multiple facilities and storytelling capabilities. Later, changing social and fiscal priorities prompted the DHS and its partners to adopt new strategies for interpretation, funding, outreach, and inclusion. Eventually, the DHS would assume stewardship of the Detroit Historical Museum and Dossin Great Lakes Museum, bringing new momentum to regional public history.

It is important to note the truism that historical museums and archives can be poor caretakers of their own history. The DHS’s history was intertwined with a municipal department for so long that they actually have two histories that are only roughly preserved. Research for this volume has woven many disparate details into a cogent tapestry that is easily digested by museum professionals and visitors alike. It is a fascinating tale that reflects the pride Detroiters have in their city and shows trends in historical preservation and organizational structures across North America.

In this well-written and well-researched account, author Joel Stone tells the story of the founding and growth of the Detroit Historical Society. It is the story of 100 years and of the leadership the DHS has given and the impact it has demonstrated for the preservation and interpretation of our city’s history.

Joel Stone, under the aegis of the Detroit Historical Society, assembled disparate voices and viewpoints into a major anthology on urban social upheaval, Detroit 1967: Origins, Impacts, Legacies. In his new work—an examination of the Detroit Historical Society itself—he makes another vital contribution to the canon of Detroit historical resources and national urban narratives.

The Detroit Historical Society has been preserving and sharing the city’s history for over a century. Joel Stone does an excellent job leading the reader through the incredible ups and downs of this important Detroit institution and the critical role it has played in the history of the Motor City.

It is said that great cities need great institutions. They also need outstanding historians and scholars to record their histories. Joel Stone knows the city of Detroit well, and his book is a significant history of its primary museum and historical society. This is commendable work.

Exceptionally well researched, written, organized and presented, "100 Years of the Detroit Historical Society" is a distinctly impressive work of detailed scholarship and will serve as an impressive template for similar projects for other historical societies. While highly recommended for community, college, and university library collections, it should be noted for personal reading lists of historical society board members, American history students, academia, and non-specialist general readers with an interest in the subject that "100 Years of the Detroit Historical Society" is also readily available in a digital book format.

The history of the Detroit Historical Society (DHS) has often mirrored its city’s general narrative—with jubilant highs and discouraging lows. However, as Joel Stone’s highly informative account of the society’s first century tells us, a rightly triumphant outlook reflects this important organization’s fealty to stewardship, resourcefulness even in adverse economic times, and willingness to adapt to cultural change.

2 days 35 min ago
Now a National Jewish Book Award Finalist! @JewishBook https://t.co/qTKAeUEPVX
2 days 3 hours ago
RT @Steph_Steinberg: Tomorrow @ 7 p.m.! Join me and @DETWritingRoom at The Whitney for our first #2023AuthorSeries event ft. @waynestate… https://t.co/pssbi2NLNs
6 days 5 hours ago
SAVE THE DATE! Join author Desiree Cooper and illustrator Bec Sloane this Saturday for a behind the scenes look at… https://t.co/cKDBmbewOa